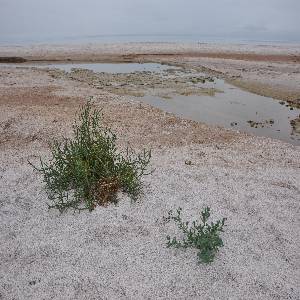 The EDGE Institute is assembling a team of researchers poised to examine the past, present, and future of the Lake Cahuilla (Salton Sea) basin. Our objective is to learn more about the natural functions of this amazing inland sea with the goal of advising how its future might unfold based on new discovery-based scientific evidence and insight. Professor Marilyn Fogel, Director of the new Environmental Dynamics and Geo-Ecology Institute, will be leading the effort.

Introduction: Long before the breach in a levee of the Colorado River filled the Salton Basin and created the current Salton Sea, this region of Southern California was filled with natural waters that created lakes many times over the past several thousand years. The Native people called these ephemeral lakes, Lake Cahuilla, a word meaning “master”. Lake Cahuilla has waxed and waned over millennia, offering the people who lived on its shores an abundant and diverse food supply, a pleasant place to live, and a ready source of water. At the same time, over 100 species of waterbirds migrating from as far away as the Arctic to the southern reaches of their range stopped at Lake Cahuilla.  The vast, productive aquatic habitats here, once part of a much more extensive group of wetlands, sustained immense avian populations. 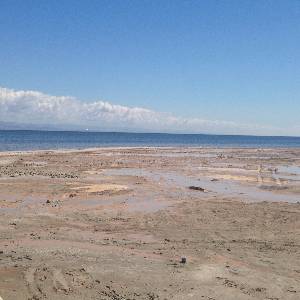 Lake Cahuilla has never been a permanent lake. Filled by water flowing from the Colorado River delta, from monsoonal rainfall, or runoff from nearby mountain ranges, the lake has alternated every 100 years or so from freshwater to highly saline conditions, and even to completely dry conditions. Sediments collected during a recent seismological study reveal that the area was at times an active sedimentary environment with streams and channels, as well as an expansive lake. The maximum extent of Lake Cahuilla was significantly larger than the present day Salton Sea extending 160 km from Coachella Valley to the current US-Mexican border.

Recent legal decisions regarding the current Salton Sea have placed this region under scrutiny by environmental groups and government agencies. Based on a court case decided in 2003, water that currently flows into the Salton basin from rivers draining the Imperial and Coachella Valleys will be diverted to San Diego for development, beginning in 2018. Scientific reports and monitoring studies have documented the disastrous effects that this water diversion will have on the Salton Sea ecosystem, its aquatic life, birdlife and its surrounding lakeshore sediments. The lake’s current salinity is 59 parts per thousand, almost double that of ocean water (35ppt). As a greater proportion of water is diverted from the sea, the salinity will continue to increase resulting in the extinction of the remaining fish species. Currently, non-native tilapia, a fish species from Africa, and the endangered desert pupfish are the only fish species remaining.  The tilapia population is sustained by primary production in the lake, thought to be stimulated by fertilizers from agricultural runoff.

The bottom waters of Salton Sea are often anoxic, having little to no dissolved oxygen, which promotes microbial reactions that can form noxious gases like hydrogen sulfide. When strong winds blow through this area, deep waters are churned up into the surface releasing these gases. These gasses have been detected as far away as downtown Los Angeles 130 miles to the west. Periodic noxious gas release events also coincide with massive die offs of several million tilapia. Rotting fish, noxious gases, as well as potentially polluted water, have given the Salton Sea an unsavory reputation.

The State of California and the US Fish and Wildlife Service have developed complex plans for managing the Salton Sea, primarily for avian wildlife and to mitigate for toxic dust from the exposed, dried lakebed. It is feared that elevated levels of selenium, concentrated in lake sediments from a century of agriculture run-off, will pose a major threat to the neighboring urban population centers if they become airborne in blowing dust. Consequently, it is planned to spend billions of dollars on engineering solutions, now and on into the future, which may or may not work. Several faculty and researchers at University of California at Riverside are joining together to develop a different scientific approach of how the Salton Sea might be considered, which in turn could affect how we deal with its future.

An axiom in earth science is that “the past is the key to the present.”   Earth scientists can bring many modern, innovative techniques to bear that will reveal the historic and modern conditions of Lake Cahuilla. This is a region that has experienced active and varied geological and hydrological processes, varying species assemblages over time, and many different climates regimes. In the Lake Cahuilla region, although we know that there were lakes formed by natural processes over the past 20,000 years, almost nothing is known about how the lakes filled with water, the organisms that were living there, or the environmental conditions of the lakes. Almost pure deposits of salt (sodium chloride) have been mined from the old shorelines of these paleolakes. The area is also a very active geothermal environment, housing several energy plants on its southern shore. Developing a detailed understanding of how this lake system functioned before human intervention could provide guidance that could be critical for ameliorating its current demise.

Although many detailed monitoring studies have been conducted over the past 20+ years at the Salton Sea, there have been few discovery-based scientific studies. UCR Professor Tim Lyons and his postdoctoral researcher Kingsley Odigie are currently studying the interactions of metals and nutrients in Salton Sea waters and sediments to understand in a more fundamental way the cycles of these elements and compounds. While local National Audubon Society chapters are surveying bird populations in the area, no research is being conducted on the food web structure of migratory and resident avian, or on how migratory bird populations adapt to and to survive periods when the lake was dried.  As the salinity increases, the types of microorganisms thriving in the lake will shift to those capable of living in extreme environments. Tilapia will eventually die, resulting in animal populations based primarily on small invertebrates, completely altering the current diets of most of the birds found on the lake.

The future of the southern California deserts and this region in particular is projected to have increased temperatures and lower rainfall. The projections are based on global models that may not be valid at a regional scale. The Salton Basin and surrounding Imperial and Coachella Valleys are regions where a large amount of our nation’s vegetables and fruits are grown. Directly north, Palm Desert, Palm Springs and the other desert cities are home to 350,000 residents who moved there to enjoy clean desert air and a mild climate. For these reasons, it is critical to understand how a changing Salton Sea will impact the overall climate of this area.

Research Thrusts: The paleo-ecology of the region will be studied by obtaining sediment and rocks cores from around the basin. Fogel and researcher Andrew Bishop will begin studies using sediment cores going back to about 3,000 years before present and develop novel geochemical “proxies” for determining how Lake Cahuilla’s ecosystems functioned during wet and dry periods. Understanding how California’s desert ecosystems have supported the humans, plants, animals, and microbes over the past 10-20,000 years is one of primary goals of the proposed research.

Critical to our ability to understand the past Lake Cahuilla system is a deeper mechanistic understanding of the current Salton Sea. UC Riverside Professor Roya Bahreini, for example, is beginning studies of atmospheric circulation patterns and gases in this area. UCR Botany professor Darrel Jenerette and UCR Environmental Science professor Jim Sickman are starting to investigate larger-scale nitrogen dynamics in this region. Together we have assembled a state-of-the-art cluster of four laser-based mobile instruments that will be able to measure the “breathing” of the Salton Sea ecosystem by measuring gases that are being produced and consumed in this complex area.

The final piece of our proposed work is to involve climate and ecosystem modelers. UCR Professor Bob Allen as well as a new hire in Climate modeling are interested in determining whether NASA’s prediction of drier, hotter weather fits with how this region has functioned in the past and how it will proceed with overall global climate changes.

We seek funds for the following:

Analysis of geochemical proxies in these sediments

Purchase and modification of a mobile laboratory for greenhouse gas measurements

The importance of the work centers around developing a deeper understanding of how the Salton Sea/Lake Cahuilla system functions which could provide more sustainable approaches to ensure that avian populations continue to have a home in the area, as well as perhaps come up with more natural ways of mitigating toxic dust risk.  Ultimately, a robust solid science perspective is essential if the desert communities of California are to effectively plan their future in our warming world. We hope that this study will start building the framework of such an understanding.